The old lord had shown himself a most gracious host during the last few hours, plying them with rare wines and loading them with rich gifts beyond what they'd asked or what the Mouser had purloined in advance, and even offering them other girls in addition to Ivivis and Friska - benison which they'd rejected, with some inward regrets, after noting the glares in the eyes of those two.


- Fritz Leiber, The Lords of Quarmall
In every Fafhrd and the Grey Mouser story that I've read (admittedly, I haven't come close to reading them all) there are exactly two major female characters. One of them always ends up with Fafhrd, and the other with the Mouser. It's something of a staple in pulp fiction that winning the heart of the beloved is part of the 'treasure' that the hero acquires for his success. Where would Indiana Jones be without his Marion Ravenwood? Or John Carter without his princess waiting for him back on Mars? 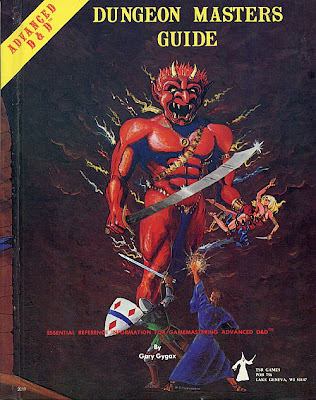 This doesn't really happen in D&D, though. I remember thinking for a long time that the woman on the cover of the 1st edition DMG is a lusty babe in need of rescuing, but she's actually a member of the party. But could we incorporate some sort of rules for wench-wooing into the game?
Well, let's just get one thing out of the way first: much as I love it, old-school pulp fiction is kind of sexist. The protagonists are almost always men and the women are usually quite passive characters who sit around waiting to be rescued or carried off like treasure. So let's just sweep that aside and take note that from hereon in these rules the term 'wench' shall refer to NPCs of any gender and sexual orientation, so long as they are enthralled by the PCs' wealth and tales of derring-do. 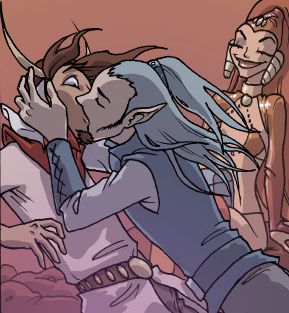 The Lusty Wenches rules are to be used alongside Jeff Rients' carousing rules. Whenever a player carouses, they may attempt to acquire additional XP by wooing a lusty wench. Assume that in most villages or towns, it is possible to find straight and gay wenches of either gender. This probably isn't an accurate simulation of medieval Europe, but whatever. Demihumans are a different matter. In many human communities, it will be impossible for dwarves and elves to find wenches unless they are willing to go interracial. On the other hand, humans will not be getting any when you visit the elven holdfast or the dwarven mines. In order to woo successfully, the player must roll under their Charisma + the amount on the d6 they rolled for carousing (the theory being that if you are partying like a madman then wenches will be more attracted to you).
If your Charisma check was a success, roll on the Lusty Wenches table to find out what kind of medieval booty you have acquired. The default XP value for bedding a wench is 100 x your level.
This table is only for wenches enticed into bed in the course of your carousing. You may encounter other lusty wenches on your travels - indeed, any NPC is potentially a wench if your DM allows you to woo them. 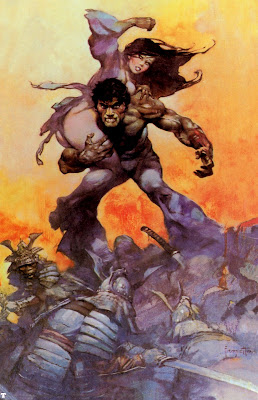 If you are a man having sex with a woman or vice versa, there is a chance of pregnancy. The default chance is 1 in 6. You may purchase a preparation of moon nettle as a contraceptive - this costs 25gp and reduces the chances of pregnancy to 1 in 50. The child will be born nine months after your lusty tumble (FLAILSNAILS players: five sessions later). Roll to determine its gender. There is also a 1 in 20 chance of there being twins. And if there are twins, there is a 1 in 20 chance of there being triplets, and so on. This is known as the Exploding Baby Die.
You may choose to retire your player character to look after your child/children. The following rules and advice are based on the assumption that the player does not wish to retire:
Sowing Wild Oats: As a father, you are required to pay the 'the furrow's price' of 50gp per month (FLAILSNAILS players: 50gp per session) to support your child and its mother. That's 50gp per child, so 100gp if you had twins. If you refuse to pay, her male relatives (and in some cultures her female relatives also) will arm themselves and pursue you, empowered by the Erinyes who decry your cruel acts. (Yes, this is a bit heavy-handed but the idea of a D&D adventurer leaving a trail of destitute single mothers is just too depressing). The alternative to paying the furrow's price is to take your child along with you. Children aged 9-15 may serve as pack hands, linkboys, etc. Children aged 16 and up may become 1st level henchmen. (I'm still thinking about some way of swinging this, because I like the idea of bringing your kid along, but hardly any D&D characters are going to stick around for 16 in-game years.) (Also, is it weird that I find not paying alimony too depressing but have no problem with leading a small child into a monster-infested dungeon?)


Becoming a Mother: For the first five months of pregnancy, you may continue to adventure as normal. In the last four months, your movement speed will be limited to a maximum of 60ft, and you will need to acquire reshaped armour to accomodate your expanding girth. Although it is inadvisable, it is possible to continue adventuring right up until the point of birth. After eight months have passed since conception, roll a d30 each day. On a 30, the baby will be born that day. Also roll for childbirth after any strenuous exercise, such as combat. (Is it weird that I really like the idea of giving birth in the middle of a dungeon crawl?)
Once your baby is born, you can carry it around with you for the first two years of its life, though it will take up two encumbrance slots. Once the baby starts walking around it becomes something of a liability and you will probably need to find babysitters if you wish to continue traipsing through dungeons. After age 9, your child can serve as a hireling (see above).
The whole pregnancy and child-raising rules will probably not get used very often, but I do think they would be fun. I really like the idea of a kid growing up as an adventurer's child. "My first memory is very vivid. I am about four years old, my mother is carrying me under one arm and a golden idol under the other. An undead gorilla is chasing us."
Posted by Will B. at 8:32 AM

Will B.
I write stories and play games. will(dot)broom16(at)gmail(dot)com